We believe that youth are the change makers and torch bearers of the future of our nations and communities at large. The Sarswati Foundation believes that by providing resources and direction to these youth, we can harness the passion, creativity, and imagination of the group to transform societies wounded by war, violence and poverty. 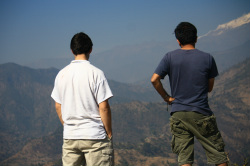 Summer 2009 we organized a summer camp for conflict-hit children in Arupokhari village of Gorkha district in rural Nepal. We also opened up a library in the village during the camp. It took us more than a month to prepare, collect books, and make logistical arrangements.

The village lies in one of most remote parts of Gorkha. The place has no road-network, electricity, or running water. From the district headquarter; it took us two days to reach the place on foot. Thankfully, there were 16 of us in the team. So, the walk was not as bad as it would otherwise have been. When we reached the village, we received a huge welcome. Given the number of people, it appeared to us as if the entire district had converged to Arupokhari to welcome us. The camp itself was primarily targeted at the conflict-hit children. Yet, we were completely amazed to see so many people in huge crowds. We had never seen such a huge public gathering for a cause that did not seem like too big of a deal for us. Actually, we were deeply touched.

Our camp was a center of attraction for people in the entire area. On the one hand, that made us little nervous, and worried that the people might have little too many expectations. But again we thought: how can these people, who have never seen anything of this sort happen, even have expectations? Everything was new for them, after all. In any case, we had huge expectations!

Over the course of the camp, we completely immersed ourselves in the community. We visited nearby schools and villages. We organized cultural programs, danced and sang with the locals. We commuted almost an hour to take a bath, and wash our clothes. Life there was far being easy. Although they seemed content with their everyday life, somewhere they seemed hungry for a change.

Once the library was set up with new furniture and the books that we had brought from Kathmandu, one could virtually smell the excitement in the air. It was simply unbelievable. Everyone flocked in the library, and the playgrounds became quite empty.

Our experience in Gorkha was heart wrenching, as much as it was interesting. The camp made us realize how even a simple act (at least it did not seem like a big deal to us) can create an impact. In some sense, the camp united the people of the area. Although many people present during the course of our camp were illiterate, one could very clearly sense an aura of excitement and hope. What we are trying to do, as a team, is merely an attempt to live up to those hopes and let the excitement perpetuate forever!